Interview with Paula Pedene: Triumph of a PR Hero and Whistleblower

If you were at PRSA International last November, you may have seen a woman named Paula Pedene honored with the 2015 PR Professional of the Year award, where she was described as having “fearless determination and strength.” That may have given you an inkling of her integrity and passion for the field, as well as the fact that she’s a U.S. Navy veteran. But Pedene’s story is more complex – and fascinating – than that.

It’s true that Paula Pedene has had an illustrious career in PR. She’s worked as a freelance reporter for Cox Broadcasting and PBS, she was the first female co-anchor on “Navy News This Week” and also served as anchor for the Far East Network in Tokyo and for “America Today.” She’s won 3 Silver Anvil Awards and more than 80 government and non-government awards.

But Pedene’s recent years have been marked by vivid triumphs and some public battles.

For 20 years, Pedene served as chief spokeswoman for Phoenix Veterans Affairs Hospital. As a Navy Veteran, Pedene was perfectly suited for the position. Well-known and well-liked in the Phoenix community, Pedene had several high-profile duties, including overseeing the Veterans Day parade. “I love the parade,” Pedene says.

All of that changed when Pedene helped file a complaint regarding financial mismanagement and a hostile work environment at the VA Hospital. “What happened was that a manager was creating a hostile environment,” she explains. “People would be pitted against each other or embarrassed in front of groups. We had an excellent training program to help us retain talent, but now A-players and senior level people were leaving in droves. Between that and mismanaged funds issues, we reported it to the Inspector General.”

Pedene did what so many professionals in all fields are too intimidated to do: she became a whistleblower, bravely putting herself on the line for the good of the veterans she was determined to serve. She testified in the resulting investigation, which found the director in question had a multimillion-dollar shortfall in budget. He retired, which should have been the end of the matter – but it wasn’t.

“Because of the whistleblowing, I was put on a list to watch,” Pedene says. “I was moved from my building, where I had autonomy, to a place where I could be monitored. They removed my staff and funding but kept my duties the same, which led to me working 80-hour weeks. I had no event support; instead I was told to do events on personal time and my dollar. It went on for months – that gray area where managers can do certain things to make you miserable so you leave.”

From Leadership to Loss

Shortly thereafter, Pedene was again organizing the annual Veterans Day Parade. While she was putting together a Powerpoint presentation, she asked her husband to help upload some parade photos onto her work computer, something that was a problem for her due to a visual impairment.

Having a non-employee use a VA computer was an extremely minor infraction of VA policy. But Pedene was demoted multiple levels, reassigned to a desk in the basement library, forced to surrender her phone and stripped of her position as hospital spokeswoman. Once lauded for her PR expertise and role as a community leader, she now spent her days assisting visitors with trivial tasks like running the copier.

Weeks turned into months of isolation, which turned into two years. Several unsubstantiated investigations were lodged against her. A sense of professional stagnation set in.

Pedene filed a retaliation complaint. The House Veteran’s Affairs Committee investigated her case, as so did the Office of Special Counsel, which protects federal whistleblowers. Her efforts were successful; Pedene eventually reached a financial settlement with the VA.

Today, in addition to running her own agency, Pedene still works for the VA, though she has not been restored to her title or responsibilities as public affairs officer. She remains steadfastly dedicated to the cause of veteran well-being, saying, “I’m still serving the people I care about.”

It’s a laudable attitude, given her unfair treatment. So it’s not surprising that she was named the PRSA 2015 PR Professional of the Year, an award given to someone who “represented the best in public relations as an outstanding example of the management function that establishes mutually beneficial relationships between an organization and the public on whom its success or failure depends.”

Kathy Barbour, PRSA 2015 National Chair, pointed out that Pedene’s high integrity and commitment to veterans made her a role model for PR pros, saying, “Throughout her life, Paula has demonstrated a high level of courage and fortitude we all should aspire to reach.”

Pedene has been modest about the many accolades directed her way, saying, “I’m so honored by the award. But veterans are the true heroes here.”

Beyond her quest for justice, Pedene’s entire career has been rich with public relations expertise and accomplishments. So what advice does she have for the emerging PR pro of today?

“We’re not seeing good writing in young PR pros lately,” she says bluntly. “Often I see sentences that are just too long. 12 to 14 words, that’s the sweet spot. Be compelling, write well, keep it short and sweet.” She points out that public relations is more than glamorous events. “15 percent of PR might be out there in the public eye but the rest takes place behind the scenes. Today you need skills like writing, HTML and photography to be able to tell the most relevant story fast and well.”

She also has some thoughts about the rise of PR technology. “Technology can be both a blessing and a curse,” she says. “The right tech can make your lives easier and help you support clients better, but some tech can also take away opportunities for us to get together one on one. When you’re with someone face to face, you can see their eyes, read their body language. And as you’re talking about something, you can take the time to step back and discuss it. The best PR is that which we can do one on one.”

(Editorial note – We couldn’t agree more, given that we designed IrisPR to strengthen those vital 1:1 relationships.)

It’s clear that even in a field marked by many notable leaders and thinkers, Paula Pedene stands head and shoulders above the rest. A hero for our time, she’s an example of bravery in the face of adversity, but also as a leader who exemplifies the potential of PR to help others through bold and ethical action. We can’t wait to see what she does next.

Paula Pedene is an ethics inspiration to me. She is a service-disabled veteran, was a public affairs officer in the Navy and works at the VA. She was PRSA’s PR professional of the year in Read more… 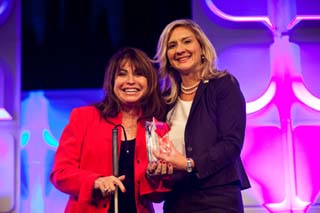 Paula L. Pedene, APR, Fellow PRSA, is having a difficult time trying to narrow down a low point during her tumultuous last few years working for the Veterans Administration. “There were so many,” she says Read more…